Bridging the Development Gap
What is the 'development gap'?
The wealth of traditional and rising superpowers contrasts sharply with the continuing poverty of some peoples and nations. T﻿he gap between wealth and poverty can be measured in a variety of ways, but is generally taken to be increasing. A range of theoretical concepts can help explain the geography of the development gap, and its pattern can be illustrated t﻿hrough the study of trade and investment flows. The development gap can be seen in terms of rural and urban divides, and in terms of ethnicity and gender.
Reducing the gap:
Development can reduce the gap, and raise people out of poverty, but it often comes with social and environmental costs, and it has not occurred in all locations. The challenge is to begin to reduce the development gap in countries and regions which have so far failed to benefit from the processes of globalisation. There are numerous ways this might be achieved, but there is no universal agreement of which way might be best. 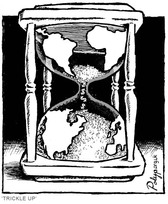 1. The causes of the 'development gap'
1.1  The global development gap can be measured by traditional economic indicators (GDP) and broader quality of life indicators (literacy rates, HDI etc).
This is an interesting interactive visualisation to get you thinking about indicators and development. Also, see below the excellent UNDP interactive page on human development indicators.  The Millennium Development Goals (MDGs) provide a framework for measuring the development gap and progress towards reducing it. Investigate these using the UN's MDG monitor country profiles and MDG country fact sheets.

1.2  There are a range of theories (e.g. development, dependency, core/periphery, the role of debt) that can be used to explain the widening gap between developed and developing economies.

1.4  Trade and investment play a key role in the development gap, and global wealth distributions; the importance of ‘terms of trade’, and ‘north-south trade flows’. Exemplification of trade patterns in, for example, coffee or bananas in exemplar countries.

2. The consequences of the 'development gap'

2.1  The development gap has social, economic,environmental and political consequences for people in the most disadvantaged countries – for example sub-Saharan Africa, women and caste divisions in India.

2.2  The development gap is increasingly problematicin developing megacities, where the growth of the urban poor is increasing, for example cities such as Nairobi, Bangkok and rapidly growing cities in Africa.

2.3  The development gap often has an ethnicand/or religious dimension such as in South Africa, Indonesia and East Timor; and can be associated with migrations, social unrest and new political movements.

2.4  There are positive and negative consequences for countries which are developing and reducing poverty; as development and the environment are rarely compatible unless carefully managed, for example India or China.

3.1  There are a range of theories and approaches that underpin attempts to reduce the development gap (for example Modernisation and Neo-liberal, Marxist and Populist approaches, against grassroots approaches); these tend to be mutually exclusive.

3.3  Trade, investment and economic growth (including the role of Governments, the WTO, TNCs, SAPs and HIPC) have a role in reducing the development gap, but this is controversial and there are alternative approaches, for example fair trade.

3.4  For some, the future of the development gap is a stark one, unless difficult choices are made by a range of players, many of whom have conflicting priorities.